Give us your memories and stories about the shows featured in Sunrise Festival 2011: Summer Storm!

Selected responses will be featured at the “Zen’yasai” event on August 5th! 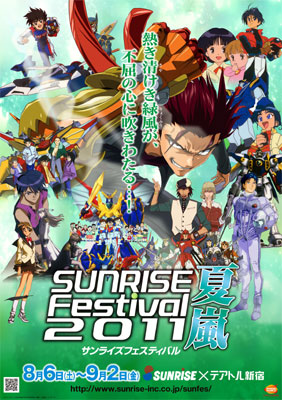 The official site for Sunrise Festival 2011: Summer Storm, which begins August 6th at Theatre Shinjuku, is now collecting memories and stories about its featured shows!
Sunrise Festival 2011: Summer Storm, running frum August 6th to September 2nd, features late-show screenings of Sunrise works ranging from the old classics to the newest hits.
Each Saturday screening is an all-night event with special guests.
Its official site is now collecting memories and stories about each of the 25 featured shows. Selected anecdotes will be used during the “Zen’yasai” on August 5th, which will stream live on Bandai Channel Live! at 8:00 PM on the 5th!
The lineup includes Mobile Suit Gundam F91, Mobile Suit Gundam Wing, and Mobile Suit Gundam SEED, so we’re sure you have plenty of great stories to share!