Get your tickets to see Nobuyuki Hiyama (Shiro) and Kikuko Inoue (Aina) before they're gone! 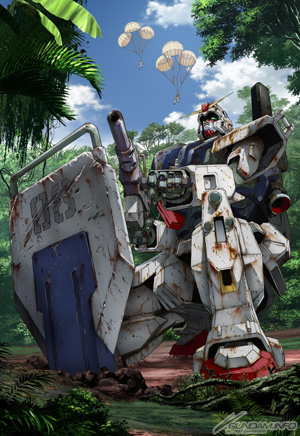 Tickets for January 19th's Mobile Suit Gundam 08th MS Team Talk Show and Select Screening at Shinjuku Picadilly went on sale from the theatre's site at 4:00 PM on the 7th.

The event will celebrate the upcoming release of the Mobile Suit Gundam 08th MS Team Blu-ray Memorial Box with a talk show featuring Nobuyuki Hiyama (Shiro Amada) and Kikuko Inoue (Aina Sahalin).
Also shown will be four episodes from the series selected by Gundam.info visitors, as well as the premiere of the short film "Sanjigen to no Tatakai" which will be included in the boxset.

Voting is open until 5:00 PM tomorrow, the 8th!
Choose your top four to be screened at the event! Get voting, everyone!


All twelve episodes, from "War for Two" to "The Shuddering Mountain, Part II" along with the epilogue special "Last Resort", are included on the Blu-ray. A ten-minute short film "Sanjigen to no Tatakai" rounds out the set.
The limited release, only available for a year, will cost ¥26,250. Preorders close on January 15th, so don't forget to order!