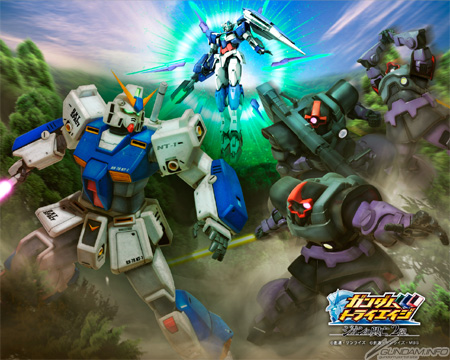 The official site has a Zeon no Kobo Set #2 wallpaper available, and is straming episodes 1–4 of Mobile Suit Gundam 0080: War in the Pocket for free. See the newly-introduced Gundam NT-1, Zaku II Kai, and Kampfer in action!

Try out TryAge, and then watch some Mobile Suit Gundam 0080!

More info is available on the Gundam TryAge official site.


The digital card game Gundam TryAge lets you mix and match suits and pilots far outside their original works!
The mobile suit and character cards placed on the panel spring to life on the monitor, ready to attack wherever you move their card in a pitched battle!
Try it out at toy stores, toy departments, arcades, and more!
Each credit is ¥100, and comes with a free card!