Chief Director Yasuhiko and key cast members will be there, and attendees get a special present! 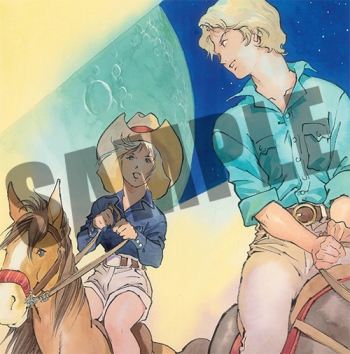 
Moble Suit Gundam The Origin II: Artesia's Sorrow hits theaters across Japan on October 31st, but you cam be among the first to see it at "Red Determination", a special premiere event to be held October 17th at Toyosu PIT in Tokyo!

Not only will you be able to see the second chapter of The Origin early, but a lineup of special guests includes general director Yoshikazu Yasuhiko, cast members Shuichi Ikeda (Edouard), Megumi Han (Sayla), Shigeo Kiyama (Ramba), and Miyuki Sawashiro (Hamon), and even theme song artist Kaori Sawada, who will perform Hamon's "By Your Side" live.
Attendees will also receive a mini-shikishi of Edouard and Sayla.

In U.C. 0071, Casval and Artesia depart the Republic of Munzo for Earth, taking the aliases Edouard and Sayla in an attempt to find peace. Pursued again by the Zabis, their fate turns when they encounter a young man named Char Aznable. Meanwhile, development progresses on the "Mobile Walker", a weapon to defeat the Earth Federation...